The majority of honey bees you’ll find in the hive are female worker bees. The job of a worker bee depends on their age. The first 3 weeks of life are spent inside as nurse bees feeding the young, cleaning, building cells, and protecting the hive (1). For the final 3-4 weeks of life, worker bees are foragers. During this time they leave the hive to gather the nectar and pollen needed to make the honey that will feed the entire hive. These are the bees you see buzzing from flower to flower. They also act as scouts who may seek out new hive locations. Eventually, worker bees die from overwork and sheer exhaustion, and often with worn out wings (1).

Foragers return to the Salmon Center hive. Note the orange and yellow clumps of pollen stuck to some of their legs. 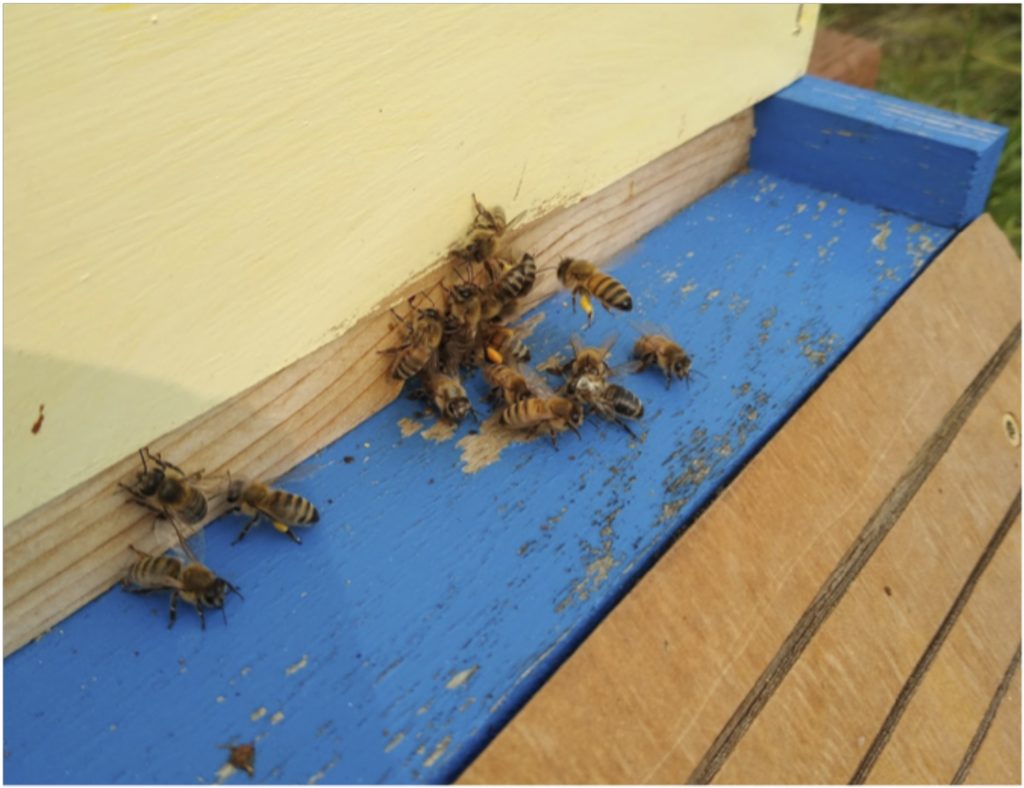 Drones are male honey bees, and develop from unfertilized eggs. They have many distinct physical features compared to the worker bees: they have larger, rounder abdomens; lack stingers; and their eyes meet at the top of their head, like flies (worker bee eyes are smaller and are located on either side of their heads) (3).  Drones spend their lives very differently than the other bees in the hive. They don’t contribute to the survival of the hive, only using it to feed and shelter themselves. Most days they leave the hive in the afternoon and fly to a congregation with other drones from the surrounding area (3). Here, the drones expectantly wait for a virgin queen to join them on one of her mating flights. A drone lives for the moment when he will mate with a queen.

Each hive has one queen bee. She is the largest bee and her long, pointed abdomen distinguishes her from both worker bees and drones. The queen communicates with her colony about her health and abilities by emitting pheromones (these are chemicals with distinct smells that send information to the other bees, like a secret code). Her daily needs are met with the help of worker bees who feed and groom her (1). The queen bee’s main role is to lay eggs; she lays hundreds to thousands of eggs a day. Without a queen, a hive won’t be able to survive. 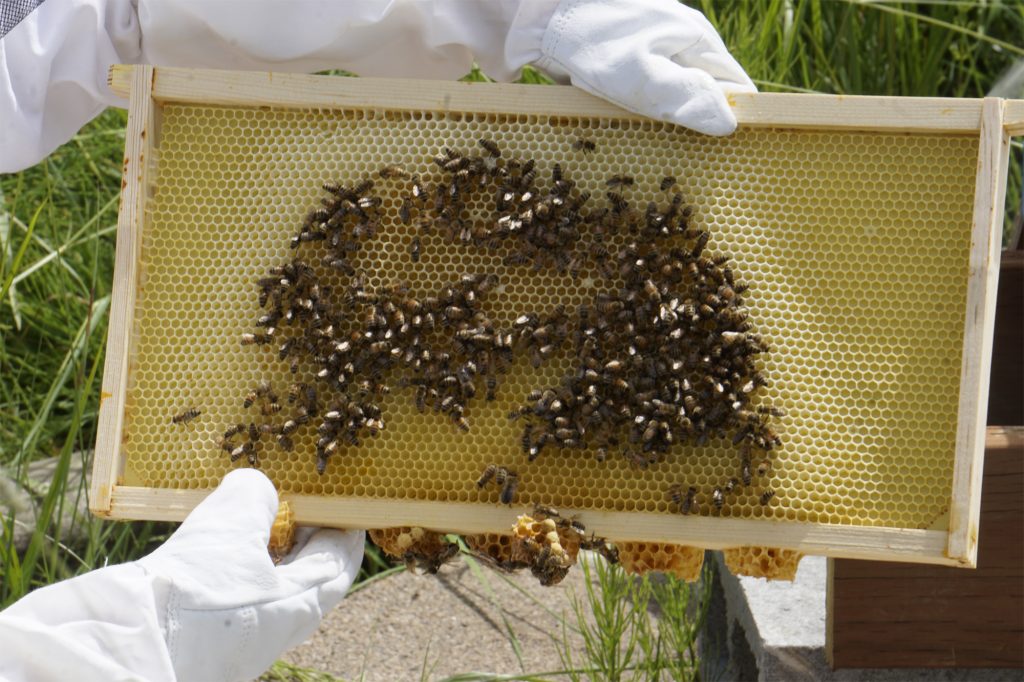 Worker bees are responsible for building the honeycomb onto these frames – a network of wax hexagons that will hold honey, pollen stores, or brood (eggs and developing larvae).

The honey bee life cycle begins when the queen mates. She flies – potentially a few miles – to a congregation of drones waiting for a virgin queen. When mating, the drone places his sperm sac into the queen’s abdomen; this usually removes his inner organs and leads to his death (3). The queen will mate with several drones on her mating flight, so as to increase the genetic diversity of her eggs. The sperm she collects will last her entire egg laying life.

Upon returning to the hive, the queen begins laying eggs. The worker bees decide how many of each type she’ll lay based on the cell size they create. When she reaches a drone sized cell she releases an unfertilized egg and when she reaches a worker bee sized cell she releases a fertilized egg (5). Three days after the eggs are deposited into the cells they become larvae. The larvae are fed by young worker bees and eat around 1,300 meals a day for 5 days straight. At this time the larvae are 1,570 times bigger than their original size and worker bees cap off their cells with beeswax (5).  Over the next 7.5 days or so the larvae spin cocoons around their own bodies. At this point they are considered pupae. When a pupa chews its way out of its cell, it emerges as an adult bee, ready to do its job.

In spring, after a winter in the hive, honey bees slowly venture out in search of pollen and nectar when temperatures begin warming. The colony will start raising brood to replace the bees that have died over the winter and replenishing their depleted food stores. 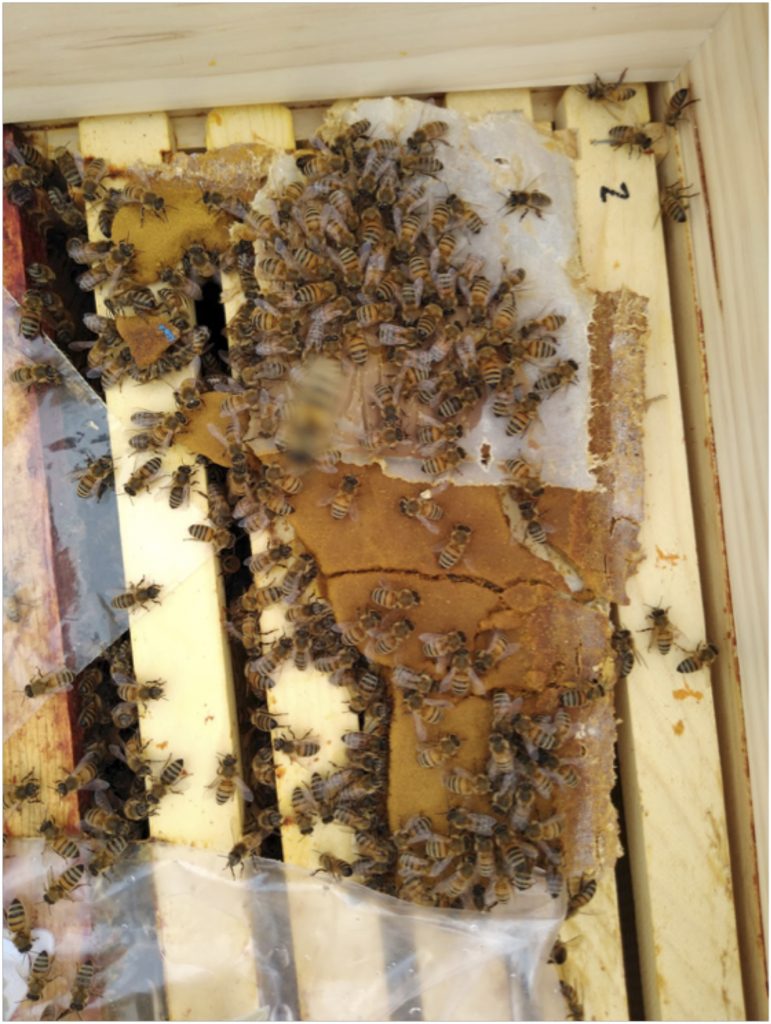 Honey bees eat from a ‘pollen patty’ which provides extra nutrients for a new or struggling hive.

In summer honey bees continue gathering nectar and pollen and raising brood. The bees will be active outside of the hive, flying back and forth as they forage. A healthy hive will become heavy with honey, much of which is stored for winter.

As temperatures cool and nectar becomes hard to find, honey production slows. To help the colony, beekeepers may begin feeding their bees with sugar syrup to help them stay strong during the approaching winter. At the same time, the worker bees have a plan to conserve food: kicking out the drones. The drones don’t contribute to the hive, yet take from it in the form of food and space. Therefore, worker bees drag them out of the hive and block their reentrance to protect their precious, hard earned supply of honey.  Worker bees also stop building drone cells so that the queen won’t release more unfertilized eggs that will become drones (5). 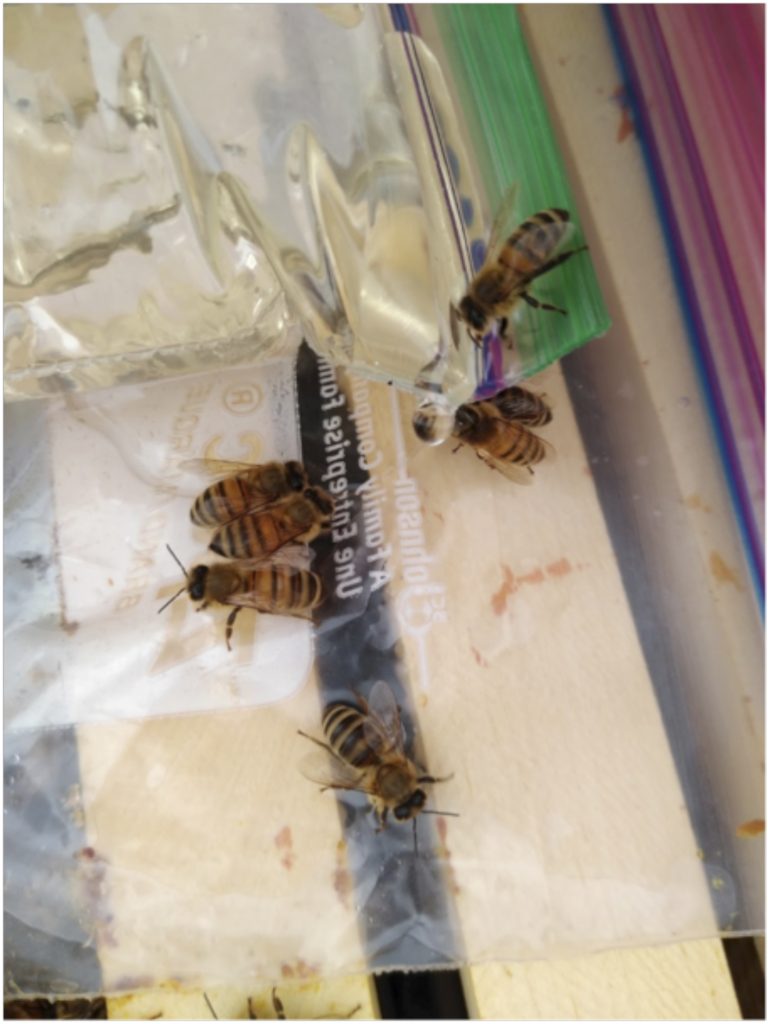 Honey bees feast on supplemental feed (sugar water) to get them ready for winter.

During the winter, the hive is quiet on the outside. The bees cluster together around their food (perfectly preserved honey) to maintain warmth. The queen may lay a few eggs, but because any brood will need to be protected from cold, she won’t lay as many as usual. Beekeepers will often give the honey bees solid sugar feed during the winter if they’re concerned that the colony didn’t store enough honey. Sometimes beekeepers also step in to move hives to protected areas and add insulation and wood shavings or other materials to absorb moisture.