Meet our dedicated team! We work hard every day to restore and protect Pacific Northwest salmon and steelhead populations and habitat in the Hood Canal region of Washington State. 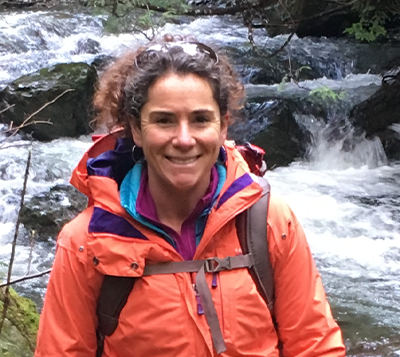 Mendy Harlow moved to Mason County in 2003 from Tucson, Arizona where she received her Bachelor of Science in Wildlife, Watershed and Rangeland Resources from the University of Arizona. Having grown up in the Pacific Northwest, she returned to pursue her passion for connecting people with the natural world around them. In her first year with the Hood Canal Salmon Enhancement Group (HCSEG), Mendy was the Team Leader for the Group’s AmeriCorps team which was an opportunity for her to engage in community projects and citizen science activities while truly falling in love with the flora and fauna of the Hood Canal watershed and its people. The majority of Mendy’s time with HCSEG has been focused on managing small and large scale habitat restoration projects throughout Hood Canal. She has served as the group’s executive director since 2013. In her spare time, Mendy enjoys gardening, yoga, mountaineering, running, rock climbing and backpacking with her partner Brandon, daughter Allie and their two llamas.  She serves in the Rotary and Kiwanis Clubs of North Mason, the North Mason Scholarship Foundation and is a Mason County 4-H leader and Master Gardener. Mendy is grateful for the amazing community she works in and the brilliant HCSEG staff and Board of Directors who work with her to save Hood Canal, one wild salmon at a time. 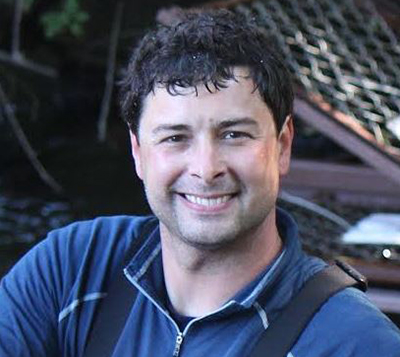 Clayton joined the Salmon Center in April 2014.  Being an avid outdoorsman and fisherman, Clayton is dedicated to helping recover and protect the native salmon and steelhead runs in Hood Canal.  His primary projects include the Hood Canal Steelhead Project, Union River Summer Chum Project, and monitoring the Union River Estuary Restoration.  His other responsibilities consist of managing college interns, who assist with data collection, and coordinating efforts with other project entities, such as NOAA Fisheries and WDFW.  Clayton graduated with his BA of Environmental Science from Western Washington University’s Huxley College of the Environment in 2013. 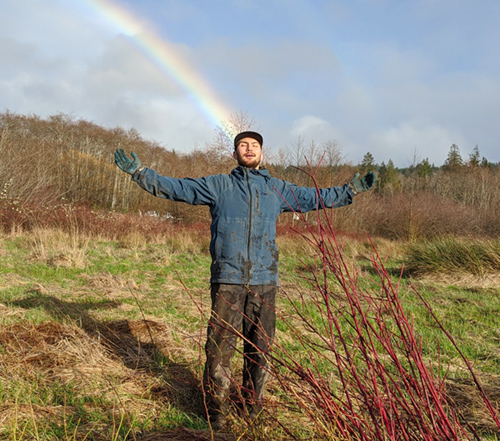 Alex joined the Hood Canal Salmon Enhancement Group (HCSEG) in February 2019.  Alex was the crew supervisor for HCSEG’s Washington Conservation Corps Crew for three years and has also worked for the Department of Natural Resources as a wildland firefighter for four seasons.  Alex graduated from Western Washington University with a Geography Major and GIS Minor from Huxley College of the Environment; he also has a second major in classical piano studies. In his spare time Alex likes to grow native plants in his garden and, depending on the time of year, you may see Alex mountain biking or splitboarding up and down the mountains around the Salish Sea. 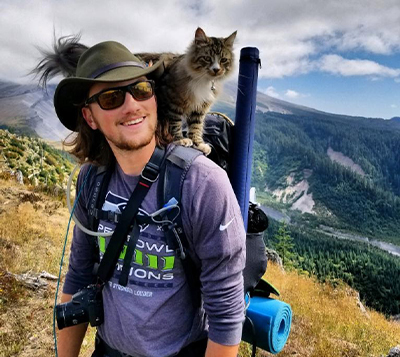 Lucas joined the Salmon Center in October 2018, as the Education and Outreach Coordinator. Lucas graduated in 2016 with a BA in Environmental Studies and Minor in Environmental Education from Western Washington University’s Huxley College of the Environment. His goal is to pass on stewardship of the natural world, so after graduating he spent two years working for the Mount St. Helens Institute, running education programs focused on volcanic disturbance and sharing the natural areas around Mount St. Helens with others. During his free time Lucas hopes to explore many new places in Mason County and the Olympic peninsula. He likes to be outside in any way possible, usually fly fishing, sometimes taking pictures of birds, mountain biking or even hiking and backpacking with his cat. 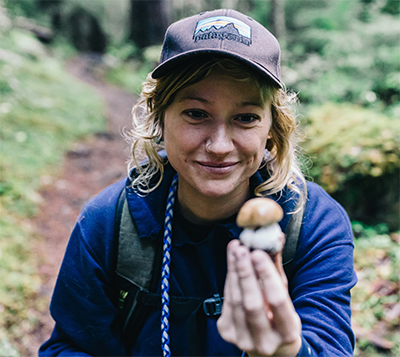 Alexandra joined the Salmon Center in October 2018 as the Communications Manager. She recieved her BA in Graphic Design from Central Washington University in 2013. Since then Alexandra has searched for ways to use her experience in the arts to serve the environment. She hopes to use her skills to tell the story of The Salmon Center, the pacific northwest, sustainable living and environmental stewardship. Alexandra grew up on the Olympic Peninsula and loves becoming even more familiar with its trails, mushrooms and waterways. She’s an avid backpacker who also enjoys climbing, surfing, fishing and painting. 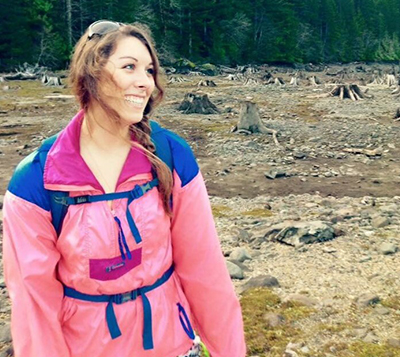 Anna Joined the Hood Canal Salmon Enhancement Group as a Project Manager in March 2018. Anna has experienced working in natural resources with several different research and monitoring projects since 2012. She received her BS degree in Wildlife and Fisheries Sciences from South Dakota State University. As a South Dakota Native Anna moved to Washington State on a whim in May of 2015 and decided to stay after falling in love with the natural beauty and grandeur of the Olympic Mountains and Hood Canal. Anna takes full advantage of living in such an amazing area and enjoys backpacking in the Olympics and sailing and kayaking on the Hood Canal anytime she has a chance. Alongside her passion for the conservation of our natural resources she has love of writing and playing music. When not at the Salmon Center you may find her performing at a local pub or festival. 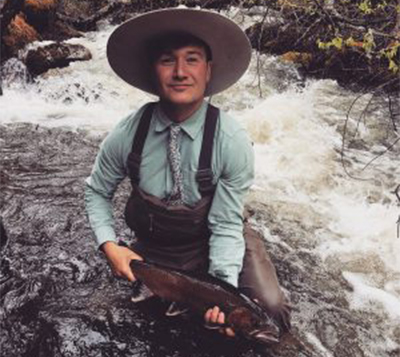 Gus joined the Hood Canal Salmon Enhancement Group as a Project Field Coordinator in April 2019. When Gus graduated with a BS in Environmental Science from Western Washington University’s Huxley College of the Environment, he decided to go explore the Wild West and study fish, plants, and wildlife as he went. After spending years working in Utah, Alaska, Oregon, and Idaho, Gus is happy to finally be back home- working to restore salmon habitat in his favorite place. Outside of work you might see him out on a beach trying to photograph the sunrise/sunset, or up in the mountains either snowboarding or philosophizing about his love/hate relationship with pillow basalt. 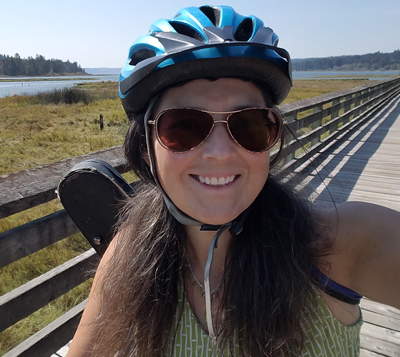 Joanne joined The Salmon Center in August 2015 as Newsletter Editor and assists with design and layout of posters, signage, artwork and printing for special events. She brings 10 years experience in the printing industry, bi-lingual skills from working with the Hispanic community, and holds a Desktop Diploma from Art Institute of Seattle and a Bachelor of Science degree in Geology from Wayne State University in Detroit. She enjoys trilliums, window painting, logo design & liturgical clipart, fiddling on her violin and bicycling to work. 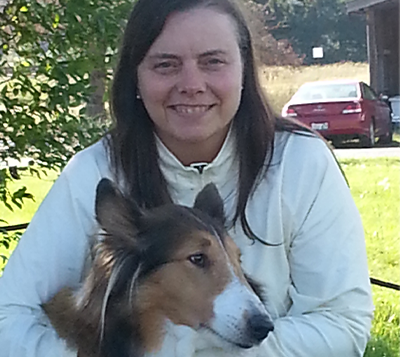 Kim is responsible for general business operations and the day-to-day functions of the organization.  Among her duties, Kim assists in grant and program administration and other administrative support. In addition, she researches projects and grants, and provides support for volunteer and education activities. 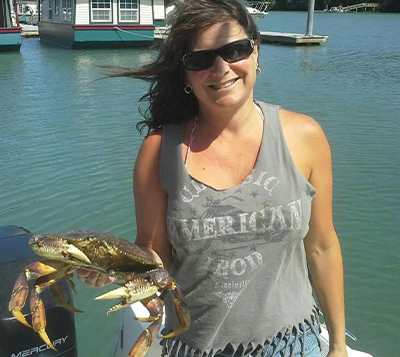 Dana is responsible for overseeing financial operations, including financial reporting. She brings many years of experience with QuickBooks, managing and running multiple industries payrolls, financial reporting, and helping to meet various accounting needs. Her favorite place to be is exploring the beaches, the waters and the woods of the Pacific Northwest where she grew up.

Jen Doughty joined the Hood Canal Salmon Enhancement Group as a project manager in March of 2020. Jen moved to Olympia, WA in 2013 from Huntington Beach, CA where she received her Bachelor of Science in Marine Biology from Cal State Long Beach. After graduating, Jen spent the next five years working in a public health lab performing clinical and environmental tests, collecting and testing water samples, and performing epidemiological studies. Since then, Jen has been involved in many water quality projects including testing for pollutants at recreational Southern California beaches, organics and inorganics in landfill monitoring wells, and for pollutants in freshwater inputs in Puget Sound for shellfish safety and public health. In her spare time, Jen enjoys hiking, kayaking, reading, playing disc golf and ping pong, and pretty much anything that gets her outside, around water, and enjoying the environment she feels lucky to call home. 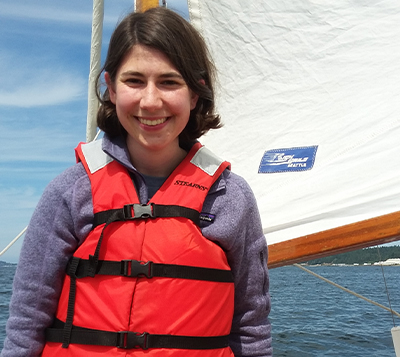 Heather is one of our 2018-2019 AmeriCorps Sustainability Coordinators. She helps manage the Farm at Water’s Edge and the community U-Pick Garden while conducting various environmental and nutrition programs for the youth community of Mason County. Heather graduated last spring from Whitman College in Walla Walla with a BA in Environmental Humanities and Creative Writing. Originally from the Olympic Peninsula, she’s excited to be back in a place with salt water and rain. Heather plans to pursue environmental writing, specifically nonfiction and poetry. She is also a dancer and loves exploring in, on, and around water.

Kassie is our 2019–2020 AmeriCorps Environmental Educator. She organizes and presents Salmon in the Classroom to 10 schools within the Mason County and Shelton School Districts. She works with our Education and Outreach Coordinator, Lucas Marin, on field trips to the Salmon Center, educational opportunities with local organizations, and other community outreach events as well. Kassie graduated from Slippery Rock University in Pennsylvania with a BS in Parks and Resource Management with a certificate in Sustainability. She enjoys chasing sunsets and waterfalls, practicing yoga, and taking in all the scenery she can of her new home of the Pacific Northwest. 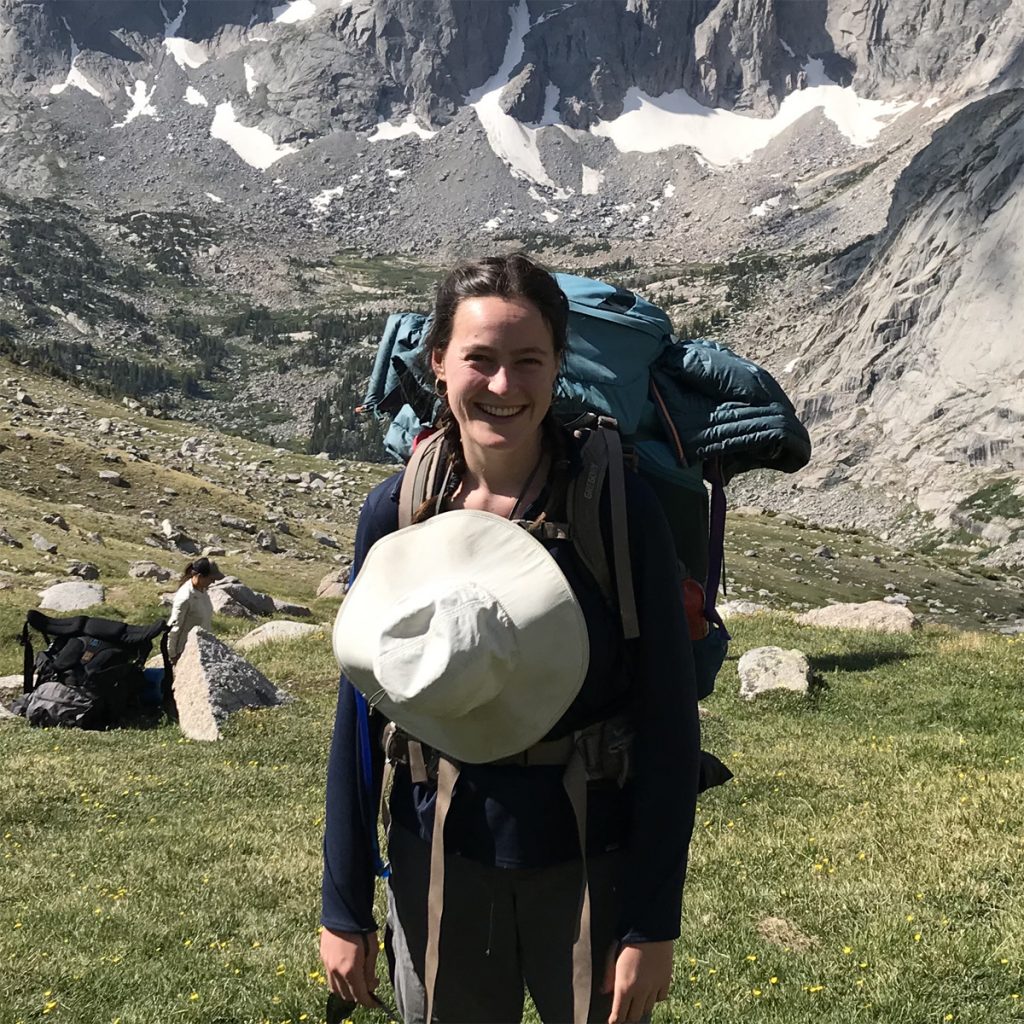 Lotte is one of our AmeriCorps Sustainability Coordinators for the 2020-2021 year. Lotte was born and raised in Berkeley, California and gained a love for the natural world during her 12 years at her local Waldorf school. Lotte graduated from the University of California, Santa Cruz in December 2019 with a Bachelor of Science degree in Human Biology and a minor in Music with a concentration in cello performance. All things food bring her joy whether that is cooking and making up unique unplanned recipes, going to farmers markets or growing her own food. She also enjoys playing the guitar, hiking and painting. She is thrilled to be starting a journey in the PNW working with wonderful people to grow food and make our community and surrounding ecosystems healthier.